Today has been an interesting day…..It started with the unveiling of “Sneak Peak 2010-2011” for Stampin’ Up!’s new catalog.  The catalog is not set to release to the public until July 1st, but demonstrators get a little sneak peek of portions of the catalog so that we can wow you all with some of the new stuff.  You know….we gotta hook so we can keep you coming back for more 🙂  So it took all day, because with any new release this big the system always gets clogged, but I did, just now get my order submitted for some new goodies.  Which means I should have my order in about a week and a half (since it does taken a LONG time to get stuff from Utah to Milwaukee) and you will get peek of what is to come in July!!

There is a lot of exciting stuff happening for the July catalog…..and I’m not going to try to BS you, there are a few disappointments, but all in all I really do see more positive than negative.  As we move closer and closer to the new release I will clue you in on more of the BIG news, but for now my word of advise is if there is any 8 1/2 x 11 paper that you use a lot I suggest stocking up now, and NOT waiting til July, as there is a bit of a price increase on paper in July.  The most noticeable increase is in the 8 1/2 x 11 which will increase from $5.50 to $6.95 for a pack of 24 of the same color.  So while it is not a super huge increase….if you go through a lot of it or are planning on making a ton of invites for some occasion I would stock up now and save some money!

Other big news is that our NEW downstairs tenants started moving in today!!  They are very nice and we are so happy to have them here, especially since they didn’t freak out when one of our big dogs got a little too excited that someone was petting him and decided he was going to try to jump up and give her a hug….yeah our dog is bigger than her, but she wasn’t upset, and knew to just push him down so he knows that is NOT acceptable.

The project that I am posting for you today is based on Splitcoast Stamper’s weekly Featured Stamper Challenge.  What they do is each Sunday they name a stamper who is known for their beautiful work, and what you are supposed to do is look at their gallery, choose one of their cards, and then CASE it, which means base your project on the one they made, but this challenge is NOT about how good you can copy someone else because you do need to change at least two things.  Last week when I submitted a card for this challenge I changed basically everything but the layout 🙂  But this week I sooooo loved the card that I kept it VERY similar to the original.  I slightly changed the color, used different die cut images and changed the greeting from “thinking of you” to “thanks.”  To see the card I based mine on click HERE.  The featured stamper’s name is Cathleen (screen name: ctorina)

The changes I made are:

1. Slight change in color….I used Kraft paper instead of the parchment type paper she used, and an ever so slightly different brown.

2. Used the Thank You Kindly Stamp Set instead of Sincere Salutations

3. Used my Cricut to cut a custom sized scalloped square (she used nestabilities),  and used the SU lattice die instead of the Fleur de lis design she used.  Also used circle scissors because I did not have the circle nestabilities.

I know this sounds like I changed a lot about the card, but if you look at the card it is more similar than different.  I just thought her card was so elegant, and made me think of yummy chocolates 🙂

One other change……I assembled the whole card upside down. LOL!!!!   OK that wasn’t a planned change, and you would have never known if I had not told you, but it was just funny that I realized after I put the finishing touches on the card that it was upside down.  So how do you fix an upside down card?

1.  Send it the way it is and let the receiver think they are the crazy one.

2. Just cut the entire card front off and attach it to a new card.

3.  If I would have realized it before I added the pearls and ribbon, I could have just covered the circle that said “thanks” with a new one turned the right direction. (since I used snail to attach it if I tried to pull it off to flip it over I would have ended up tearing the paper, so it is better to just cover with a new one the exact same size.) 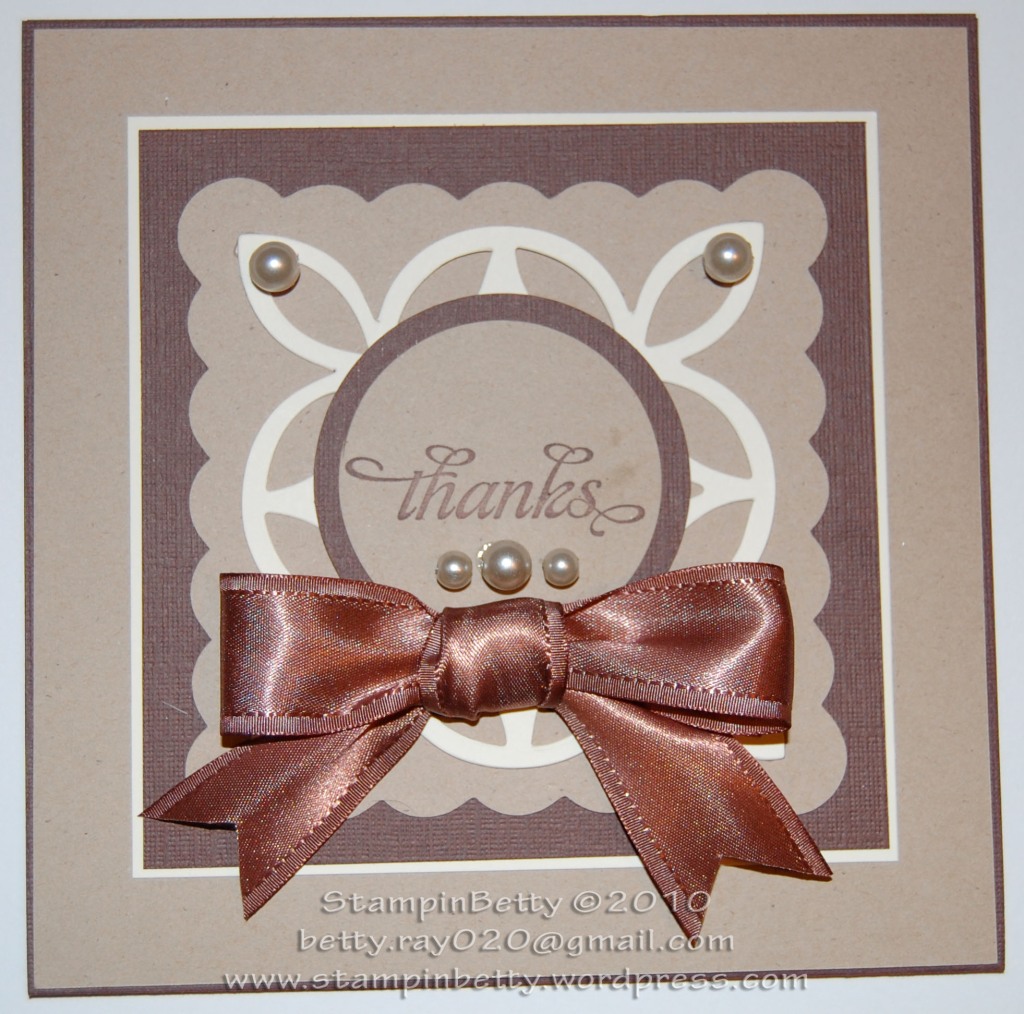 First of all….let me tell Ya’ll (getting back to my southern heritage…) I almost fell off my seat when I logged in today and looked at my hit counter!!!  At first all I saw was that diagonal line just racing up with every hit coming in, then when I looked closer I realized I had OVER 200 hits TODAY alone, and the day is not even over.  Can you imagine how big the smile on my face was.  Let me tell you, I was smiling from ear to ear, and if my husband were home I would have ran right down to him jumping up and down like I had just won the lottery.

Right now I would be very proud to do a re-enactment of Sally Fields accepting her award…”You like me, You REALLY like me.”

So today’s project is a dedication to every single one of you who have stopped by to check out this newby blog.  If you keep showing me this kind of love there is no way I could possibly fail at this challenge.  I would feel way too guilty after all the great responses I have been getting from all of you.  Just last week when I finally posted that first project I sat here thinking how silly this might be, and how in the world would people stumble across me, but some how, some way you have all stumbled to me.

The huge bump in hits I got today is most certainly due to the gallery I posted over at Splitcoast Stampers just last night!  So I will do my best to keep Splitcoast Stampers Updated with the new projects as well.  Originally I had popped over there to see what great challenges they had going on.  Those challenges are a fantastic way to get the creativity pumping when you are experiencing a block….

So here is my great big thank you to YOU!!

As always click HERE to open my Stampin’ UP page in a new window so you can purchase any/or all supplies you need to complete this card.  I have changed this from previous versions, as I found out the link I was using before was actually defaulting to a generic Stampin’ UP site where I would not have gotten credit for your purchases.  So when you click the above link to my store, to shop go to the PRODUCTS tab accross the top, under that heading click on SHOP NOW!  For those of you who would like to help support my quest to complete 365 projects in 365 days, but do not want to purchase more products, or maybe you are a demonstrator, or already have a demonstrator you can also donate directly to me by clicking the DONATE button on the upper right portion of this blog.  I accept any size donations, so even $1 is great 🙂  (donations are processed on the secure PAYPAL website.)

As you can see this is a very simple yet pretty card.  It is probably one of my favorites…. Hmmm maybe I should use this on at my upcoming workshop this Thursday????  The chocolate chip ribbon does not look like it matches in the photo, but there must have been something going on with my camera flash, because in person it looks great.

Please keep the positive feedback coming, and if there is a project you would like to see me tackle on this adventure let me know, and I will see what I can do!

Thank You for visiting,